Saturday I participated in a plein air event in Louisiana, Missouri. This was my first time there and I was not familiar with local scenery. I drove around looking for something inspiring. This entailed driving through Riverview cemetery on one lane roads that included multiple turns on the steep hillside with rock retaining walls and no railings. I was told it was the view to die for.

I did find a little park with a nice overlook that was somewhat obstructed by saplings on the hillside. I decided that my best view would be on the other side of the railing. After setting up my easel with an umbrella the wind picked up. That is when I moved to the roadside of the railing for fear that my easel would blow over the edge of the hill if I left it there. As soon as I went back to the car, it did. 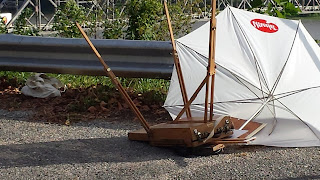 I just took off the umbrella and painted with the sun on my canvas. 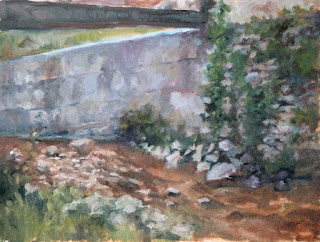 After I finished two paintings there I drove around and found this scene back behind a wrought iron fence. I had a good time and really enjoyed the company of the other artists. I met a nice group of plein air painters from St. Louis, but forgot to exchange cards. I hope if they find my blog they would be so nice as to contact me.