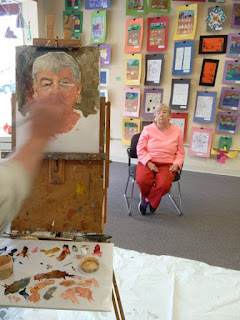 A year ago I started this project painting portraits of local volunteers. My first volunteer was Janice Feany a volunteer from the local art center.

52 Faces of Volunteerism is a tip of the hat to those who give service, freely and gladly. In January of 2015, I began donating my time to painting oil portraits of local Samaritans, at the rate of one a week, for one year. Each model was a volunteer in good standing with, at least, one of Lee County's non-profit organizations. They also had to be willing to sit through a two hour portrait session.

The idea for "Faces" was an evolving epiphany. I became interested in doing live portraits after setting up for the Artist's Studio Tour. The challenges of meeting new people (I'm a bit of an introvert) and doing live portraiture was addicting. After viewing Rose Frantzen’s Portrait of Maquoketa Project, I got the notion to set up at the local art center, more or less, once a week and paint whomever she could persuade to pose. While talking with the art center's own volunteer, it occurred to me to pay homage to those among us who give so much to others. In other words, "I've always believed that art can and should be a positive force." At the end of February, when the exhibit is over, each volunteer will be given his or her oil portrait, to do with as they will.

From the beginning the participants were encouraged to talk; so they would look directly at me (and stay awake) while sitting in one spot for two hours (no small feat for these human dynamos.) What quickly became apparent was that these are not normal people; many of them are serial do-gooders, some with forty plus years of service to several organizations. Their reasons for having their picture done vary from person to person (one gentleman posed because he was absent from the meeting when the "volunteer" was nominated.) Many are vivacious and outgoing; some are introspective, and were uncomfortable with being studied. They are as different as the entities they represent, and as alike as the ideals they pursue.

As the the months flew by, the paintings and stories amassed; another thing became obvious: The good accomplished by volunteers cannot be overstated. These fifty two people are just the tip of the ice-berg. Of the dozens of non-profits, from the largest to the smallest, no service or event gets done without sneakers on the ground to make it happen. There's no way to tell exactly how many volunteers there are in any given community, but they are manifold, and their impact is beyond measure.

The exhibit will run til the end of February at the art gallery in Fort Madison, Iowa. The opening reception will be Saturday February the 13th from 2 to 4.