Inspiration for art and life


Sometimes in our life' professional and otherwise we need some encouragement. this was on American Masters when I needed it, so I thought I would share it with you. The tale of Tyrus Wong is interesting and relevant: it involves artists, immigrants and the political climate of the time. I hope you enjoy it. 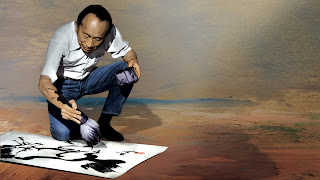 Tyrus Wong came from China, to the United States in 1919. (They were forced to leave his mother and sister behind.) The great San Francisco fire had destroyed thousands of birth and immigration records; Tyrus and his father took advantage of that fact. They entered the country posing as Chinese American Citizens.

Because of the Chinese Exclusion Act, when 9 year old Tyrus came into the country, he was detained in a cell and interrogated for over a month. He had to answer quick questions, from the United States immigration officials, which were designed to trick him into exposing himself as an illegal immigrant. He was able to prevail.

As a Chinese American in the 1930's, 40's and even 50's. Chinese American faced many prejudices; including the difficulty of trying to purchase a house. Every house he tried to buy had already been "Sold..

His first job at Disney studios was as a betweener; someone who fills in and cleans up the illustrators rough character designs and moves them from one scene to the next. I wonder if his distaste for the lack of creativity on this job had anything to do with the fact that he encouraged his children to creat art by would not let them have coloring books.

Tyrus was credited for the look and feel for the Disney movie Bambi; which had a lot to do with the emotional bond it created with the audience. Although he was the lead artist, when the credits came out he was only listed as a background artist. He was finally honored in 2001 by Disney for his work and the legendary look of the scenes in Bambi. Making a living from art can be difficult. He diversified to survive and did it successfully, Tyrus' designs are on plates and greeting cards while remaining true to his own creative vision. You don't wait for inspiration you find it in whatever you do.

His personal life was an inspiration for the devotion and longevity of his marriage. If you could have one: successful marriage, happy well adjusted children or successful career, life is good. He had it all. His marriage was a partnership based on friendship. I have to admit I got teary eyes when his wife died.